The NS 430 was introduced in 1997 and quickly became aviation’s most popular GPS. Wide Area Augmentation System (WAAS) capability was added in 2006. The sharp, clear display and intuitive button layout of the NS 430 made it the standard for general aviation around the world.

Ju-88 for DCS: World War II Assets Pack
For this week’s update, we are pleased to show some initial renders of the Ju-88 medium bomber of the Luftwaffe. The Ju-88 will be a welcome addition to the DCS World War II battlefield as both a target or an asset to defend. 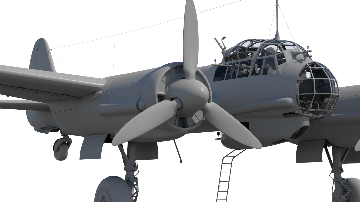 Upon arrival, you will fly a familiarization flight around the Nevada Test and Training Range (NTTR). Then you will face a series of challenging Basic Fighter Maneuver (BFM) missions against similar and dis-similar aircraft. Your opponents include the F-4E, F-5E, F-14A, F-15C, F-16C, F/A-18C, M-2000C, MiG-29G, CF-188 and MiG-21.

There are over 1000 voice overs and over 45 pages of briefing material including the RED FLAG Spins, Red Forces In Flight Guide, Maps, Diagrams, Custom Knee boards, and Mission Data cards.

Please note that DCS: F-5E Tiger II and DCS: NEVADA Test and Training Range Map are required to be installed and activated into the DCS World 2 Open Alpha for the campaign.