While new Hornet features and fixes like the Joint Helmet Mounted Cueing System (JHMCS), FPAS page, laser Maverick, and corrected air-to-air radar B-sweep are still on track to be ready next week, we need to adhere to our Open Beta release schedule and have time for proper internal-testing of these complex items. As such, these will be released in the next, scheduled Open Beta release on 7 November 2018.

Put on Pierre Clostermann’s Irvin jacket, climb into his Spitfire Mk.IX and experience the massive air battles in the skies of Western Europe described in his similarly titled book. This campaign follows Clostermann’s career from April 1943 to July 1944 through 12 missions that recreate his memoirs down to the smallest details such as time, weather, squadrons and even radio transmissions. Find out what it feels like to fly with the Biggin Hill Wing in a huge formation of Spitfires, to follow Commandant Mouchotte into gigantic melees against 30+ Focke-Wulfs, to take part in Rodeos, Circuses, and attacks on V-1 launch sites, or to support the ground troops after the D-day landings. All clear? Switches on!

MiG-29 for DCS World on Steam
Download from Steam now

The MiG-29 “Fulcrum” is a Russian-designed, twin-engine, supersonic fighter. First operational in the early 1980s, the Fulcrum is a “light weight” fighter, comparable to the American F/A-18 Hornet and F-16. Designed to work in conjunction with the larger Su-27 Flanker, the MiG-29 is armed with an internal 30mm cannon and both infrared and radar guided air-to-air missiles. For air-to-ground tasks, the MiG-29 can be armed with a large array of unguided bombs and rockets.

In addition to a sophisticated pulse doppler radar, the MiG-29 is also equipped with a passive Infrared Search and Track (IRST) sensor that allows the Fulcrum to detect and target enemy aircraft just based on target infrared emissions. This allows the MiG-29 to make stealthy attacks with no warning!

The Fulcrum is a highly-maneuverable fighter in a dogfight, and when paired with the helmet mounted sight and the AA-11 “Archer” air-to-air missile, it is a very lethal adversary.

The MiG-29 has also been widely exported and has served in many countries that include Germany, Iran, Ukraine, and Poland. For test, training and research purposes some aircraft were bought by the United States and Israel.
Key Features of the MiG-29 for DCS World:

You can read the entire Hot Fix list here

This week we also moved the current Open Beta to the Release version. You can read the change log here

You can also find both bundles on our Steam store at:

Modeling Update
We recognize that an important aspect to improve in DCS World is more realistic damage modeling in regards to localized effects, visual effects, affect on hit components, and type of weapon impact. Regarding the latter, the new damage model will be based on two types of weapon impact: penetrating impact and proximity impact. This provides us with three primary weapon effects on a unit: penetrating (projectiles), volumetric/pressure wave (high-explosive) and volumetric/shrapnel. This last effect allows weapon casing fragments to be tracked as unique objects entering the unit. This is not modeled in our current damage model system, but it will provide a great improvement to aircraft, and later, ground unit damage.

When a projectile or shrapnel penetrates a unit, the strength and functionality of the of the unit component it intersects with is affected. This includes components like spars, flight control surfaces, engine, weapons, fuel, etc. This, in turn, can greatly affect aircraft performance and system functionality. 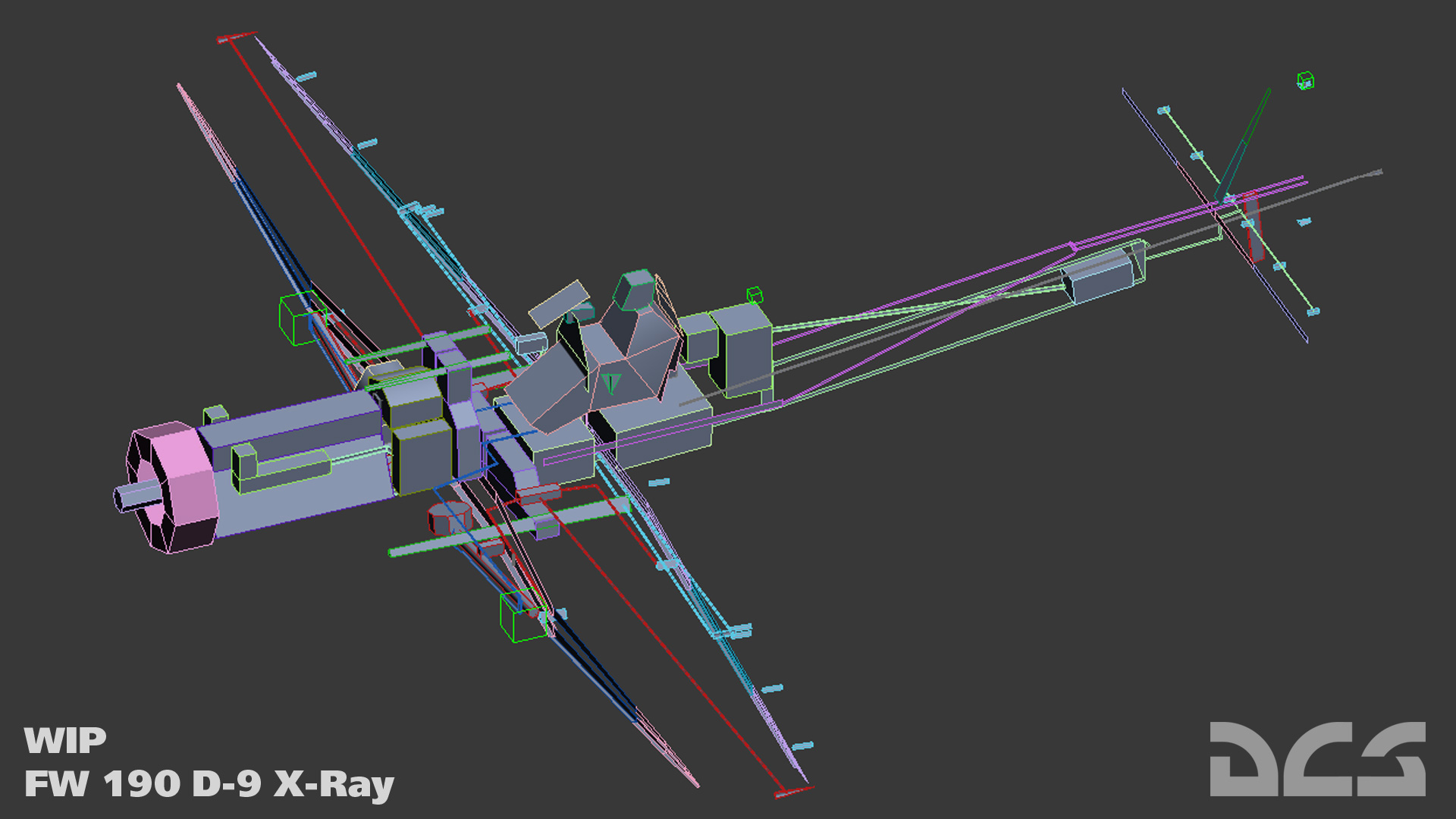 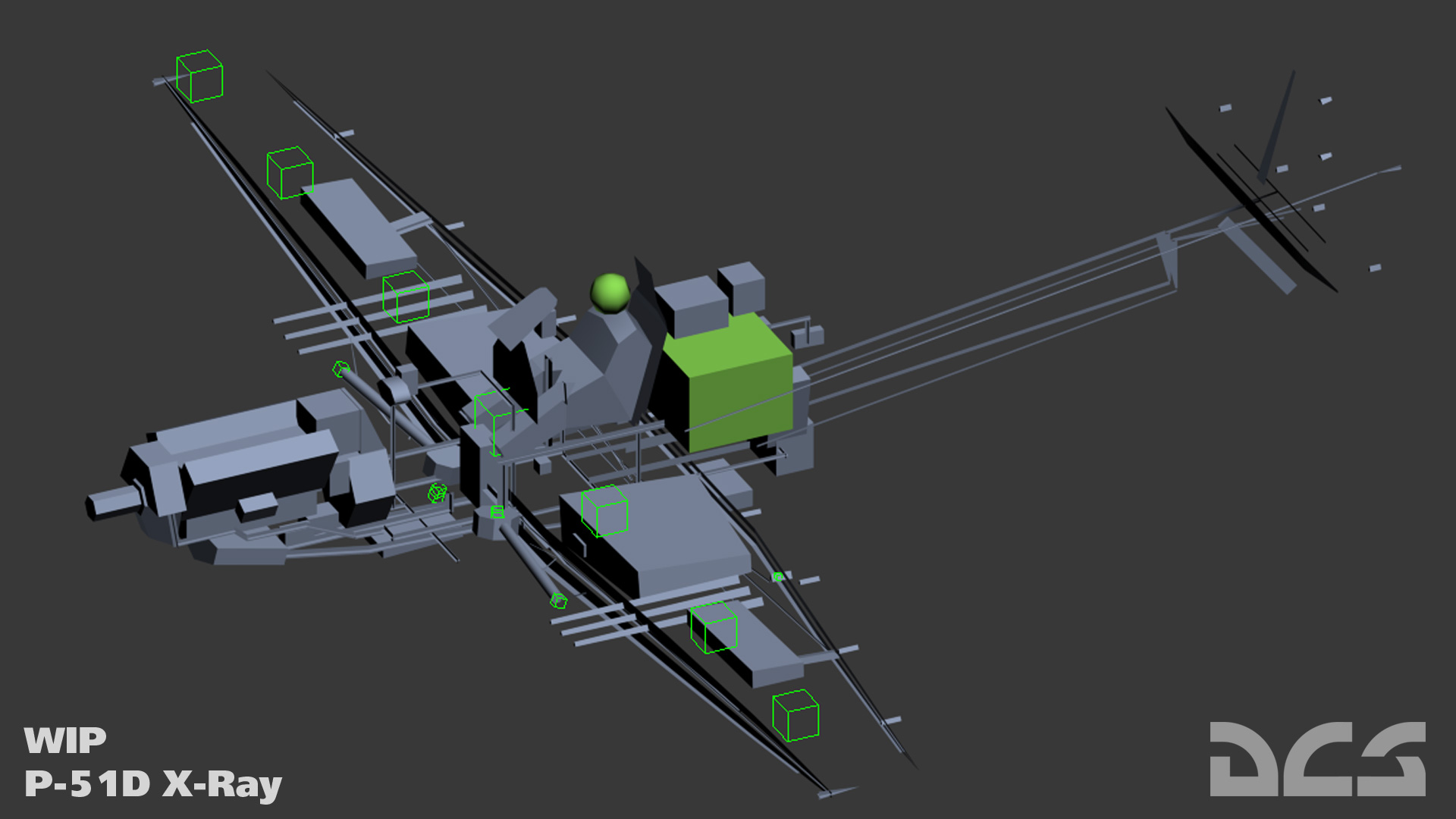 In these images, you can see the internal components of the P-51D and Fw 190 D-9 that are tracked as unique components that can be damaged.

Over the last few years, the concept of Early Access has taken traction with many companies in this industry. Before our adoption of this option, we were often bombarded with customer requests to test our products, or at least have the opportunity to have an early look. We offer Early Access to such customers, and we greatly appreciate the feedback on how we make the product even better. However, we also recognize that Early Access is not for everyone, and some players prefer their first experience in the game to be with a completed experience. We get that, and this option is not recommended for everyone.

The time a product remains in Early Access can vary widely based on the scope of the project, technical hurdles, and how complete the module is when it enters Early Access. Eagle Dynamics and all of our third parties strive to make this period as short as possible. It’s important to note that when a development team starts work on a new project while another project is still in Early Access, it is most often because it’s a separate internal team or elements of the team have completed their tasks on the Early Access project and it’s time for them to move them to move on to a new project rather than sit on their hands.

Most every two weeks (sometimes more with hotfixes) we create a new Open Beta version that comprises the changes from the prior two weeks. Although this first goes through both internal and closed-external testing, it is possible for errors to slip through. In this case, the Open Beta is utilized to identify a “blocking” bug that prevents all customers from playing the game (not just customers of a single module). For those that take part in the Open Beta, we greatly appreciate it and thank you for your testing efforts. If a “blocking bug” is present in the Open Beta, we always have the Release version available. This is why the Release version is sometimes called the Stable version.

As such, the Open Beta version is for us to “field-test” new changes and check for any DCS-wide “Blocking” crashes, and the Release version is the result of the previous Open Beta that does not suffer any “Blocks.” As with Early Access, Open Beta is an option and may not be for everyone.

Expanding DCS World on Facebook
Have you been looking for more translated DCS World news to your native language? We have recently expanded our DCS World social media presence on Facebook to include pages for Chinese and Polish pages. We welcome you to stop by and follow! We now have Facebook pages for English, German, Chinese, and Polish, with more to come: