DCS World 2.5.1 Open Beta Release
This week brings you the release of 2.5.1 Open Beta, and includes many fixes. Some of the key features are memory management and the New Offline mode.

As always, we look forward to your feedback and suggestions.

You can find the full changelog in the special topic

Chinese Asset Pack for DCS World
China Asset Pack (CAP) is a free add-on for DCS World developed by Deka Ironwork Simulations. It contains several AI aircrafts, ground and navy units, as well as weapons that have served or are currently serving in China. Deka Ironwork will keep on expanding the asset pack and add more AI units in the future.

One of the most exciting features is the Shenyang J-11A (歼-11A) known to NATO as the Flanker B+ whose airframe is based on the Sukhoi Su-27. With 2.5.1, access to this flyable aircraft is available to those who own Flaming Cliffs 3 for DCS World and later on to those that own the Su-27 Standalone. 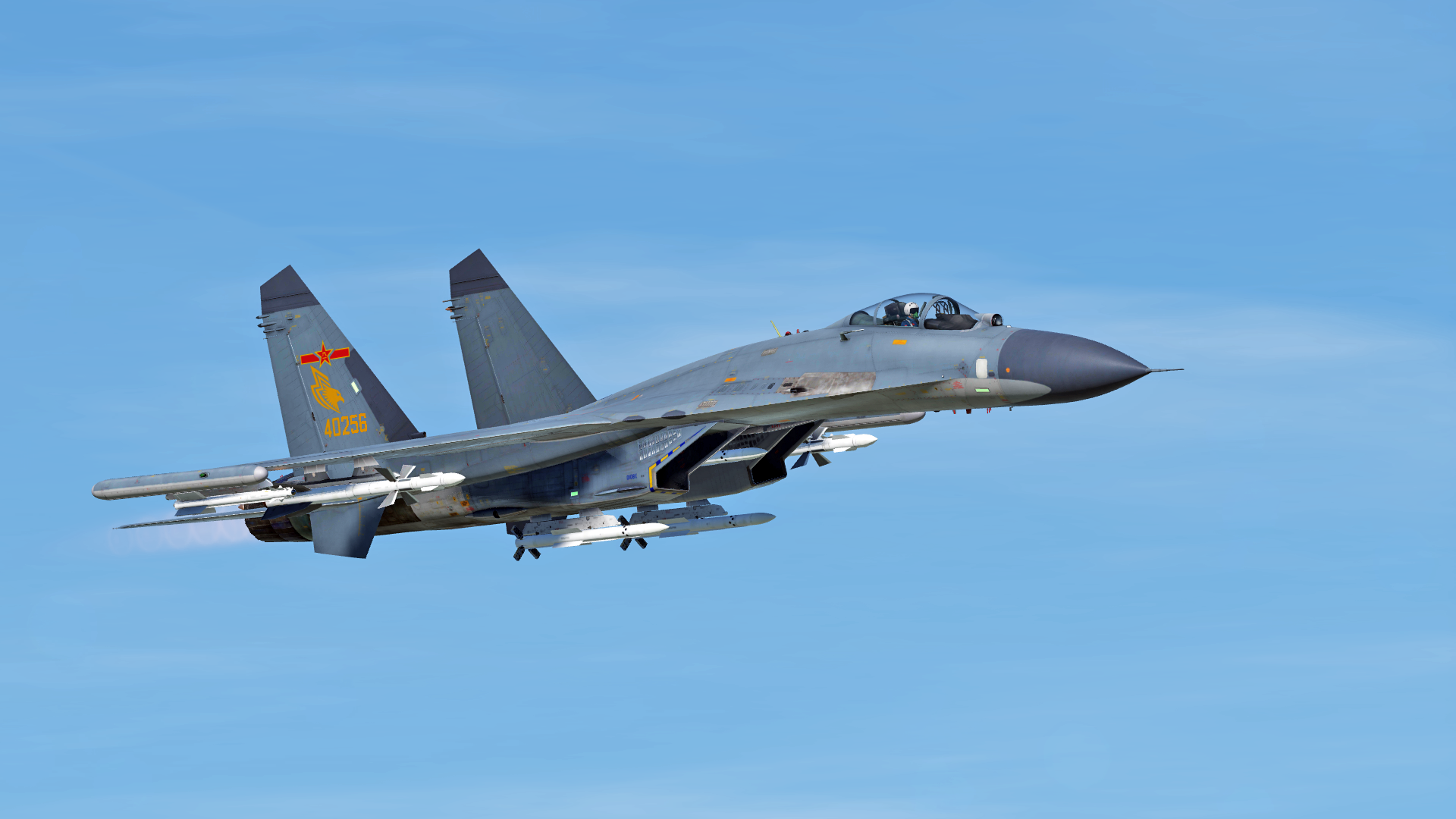 Key features that make the J-11A unique are:

You can read more on these changes in our Forums.

Based on real world procedures you will fly as Red Air against Blue Air Forces. Upon arrival you will fly a familiarization flight around the Nevada Test and Training Range (NTTR). Then you will face a series of challenging Basic Fighter Maneuver (BFM) missions against similar and dissimilar aircraft.

There are over 1000 voiceovers and over 45 pages of briefing material including the F-15C Amplified Checklist, RED FLAG Spins, Red Forces In Flight Guide, Maps, Diagrams, Custom Kneeboards and Mission Data cards.

Purchase in the DCS e-shop

DCS: F/A-18C Hornet Update
Matt and Nick are currently in Minsk and Moscow where work on the Hornet and ancillary units is progressing well.

Work has started on the management of aircraft on the CVN-74 carrier deck. Departing aircraft will appear in certain parking and elevators positions and will taxi on to the catapults. Recovering aircraft will taxi to free parking spaces. Subsequent aircraft will go to the elevator and de-spawn. On the deck it will be possible to place static objects (aircraft, equipment, loads). For this purpose we’ll provide some new possibilities in the mission editor. A little later, we will show you pictures and videos of this in action.

Many of you submitted questions to Nick, and he was happy to answer them for us, from his favorite aircraft, to his thoughts on what is and what he would like to see in DCS World. You can see the answers and discuss them in the dedicated DCS forum topic.

DCS World 2.5.1 Update
Version 2.5.1 for DCS World is currently in external testing and includes the new Offline Mode and improved memory management as its primary features. Now that it has been built, our valued 3rd parties are updating their aircraft to operating in version 2.5.1. Once this is complete, we will first move this version to the DCS World 2.5.1 Open Beta branch.
Until we can release 2.5.1 with improved memory management, we suggest looking at your System Options in DCS World. One setting that has been found to help out considerably is the Preload Radius setting, cutting that value in half can make a huge difference in load times for multiplayer servers, we suggest tweaking this setting and find what works best for you.

DCS: F/A-18C Hornet Update
Since the last Hornet update, the flight model continues to be refined; Air Combat Maneuvering (ACM) radar modes now auto-lock targets; the ground suspension model has been refined for landing and taxi behavior; a pilot model has been added to the cockpit view; new skins like the Blue Angels, VMFA-122 and low-vis skins for VMFA-232 and 323 have been added; external sounds are even more realistic; LEX vapors are more realistic looking; and Inertial Navigation Systems (INS) ground alignment has been added.

Here you can find three Hornet live streams we did of the Hornet over the upcoming Persian Gulf map:

Part 1: Hornet over UAE and Oman

We have also released our 7th Hornet academic video, this one on Hornet waypoint navigation

While this will eventually apply to all aircraft, the Hornet will be one of the first DCS World aircraft to incorporate our new rain drops on canopy effect. While still very much WIP, this little snippet shows of the general tech and animation we are using. 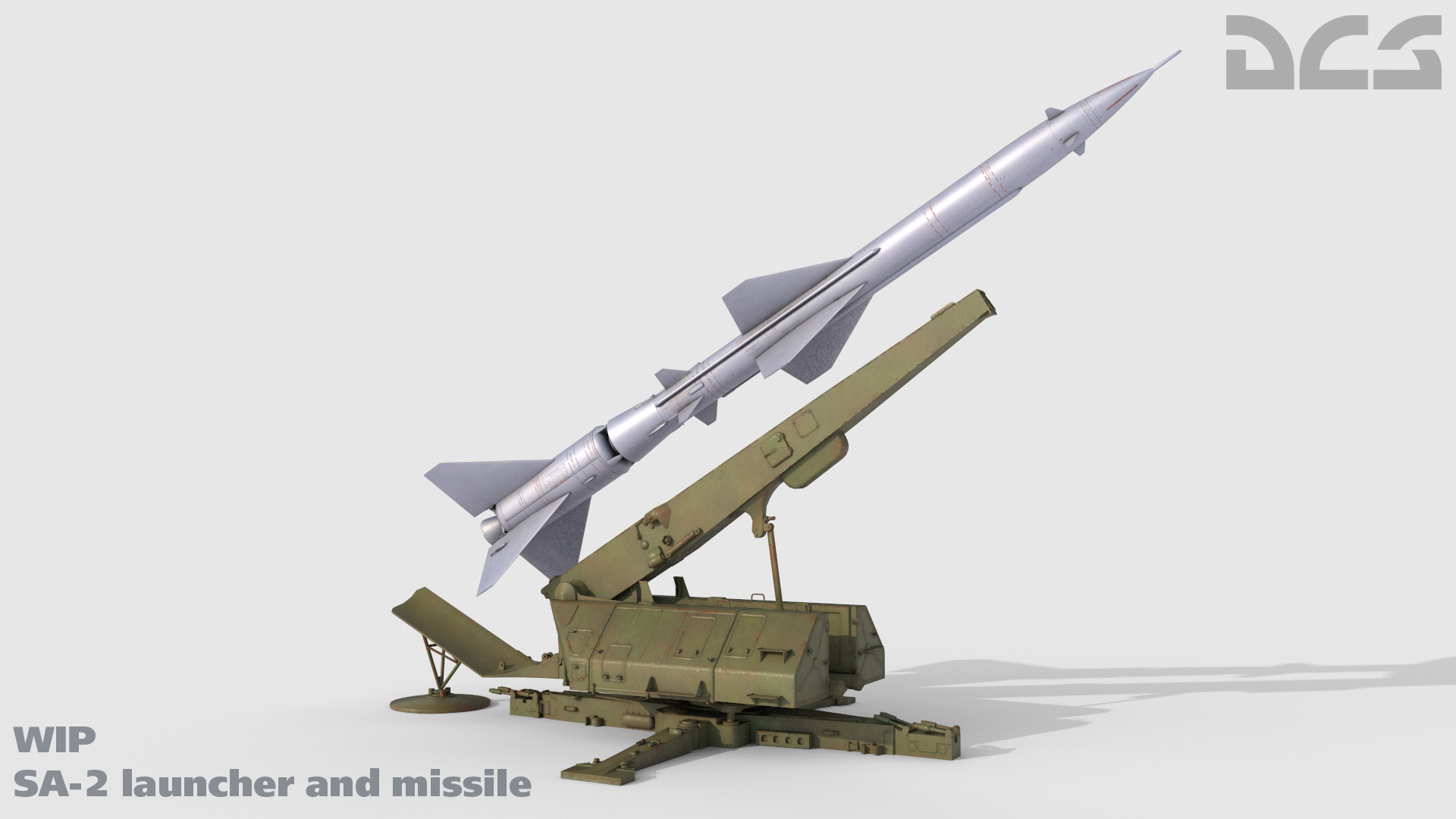 Developed and first deployed by the Soviet Union in 1957, the SA-2 was designed as a medium- to high-altitude anti-aircraft systems using command guidance. Serving nations throughout the world, the SA-2 became the mode widely deployed SAM in history, with variants produced in China and Iran. It was an SA-2 that led to the shoot down in Francis Gary Powers in a U-2 spy plane over the Soviet Union in 1960.

The SA-2 is still in service to this day and will provide a valuable element to creating even more realistic DCS World battlefields.

Since the map’s release, there have been several improvements like new period objects (windmills, water towers, farm houses, etc.), better beach lines, corrected mesh errors, cleaned up textures, and more detail in the England portion of the map. Currently, Urga Media (the developer) is occupied with their Syria map. However, once the Syria map is complete, we will discuss with them further improvements to the Normandy map like use of speedtrees.

Warbirds
In addition to completing the final touches to the Spitfire (fuel tanks and bombs), our other primary focus has been the P-47D. More so than any other warbird though, this has been the biggest challenge due to the lack of data. Following the war, all wind tunnel and needed flight dynamics data was destroyed. To overcome this, we are using Flow Vision to recreate the needed data. This has proven a long and expensive endeavor. However, to create the detailed flight dynamics that DCS requires, we consider it mandatory. 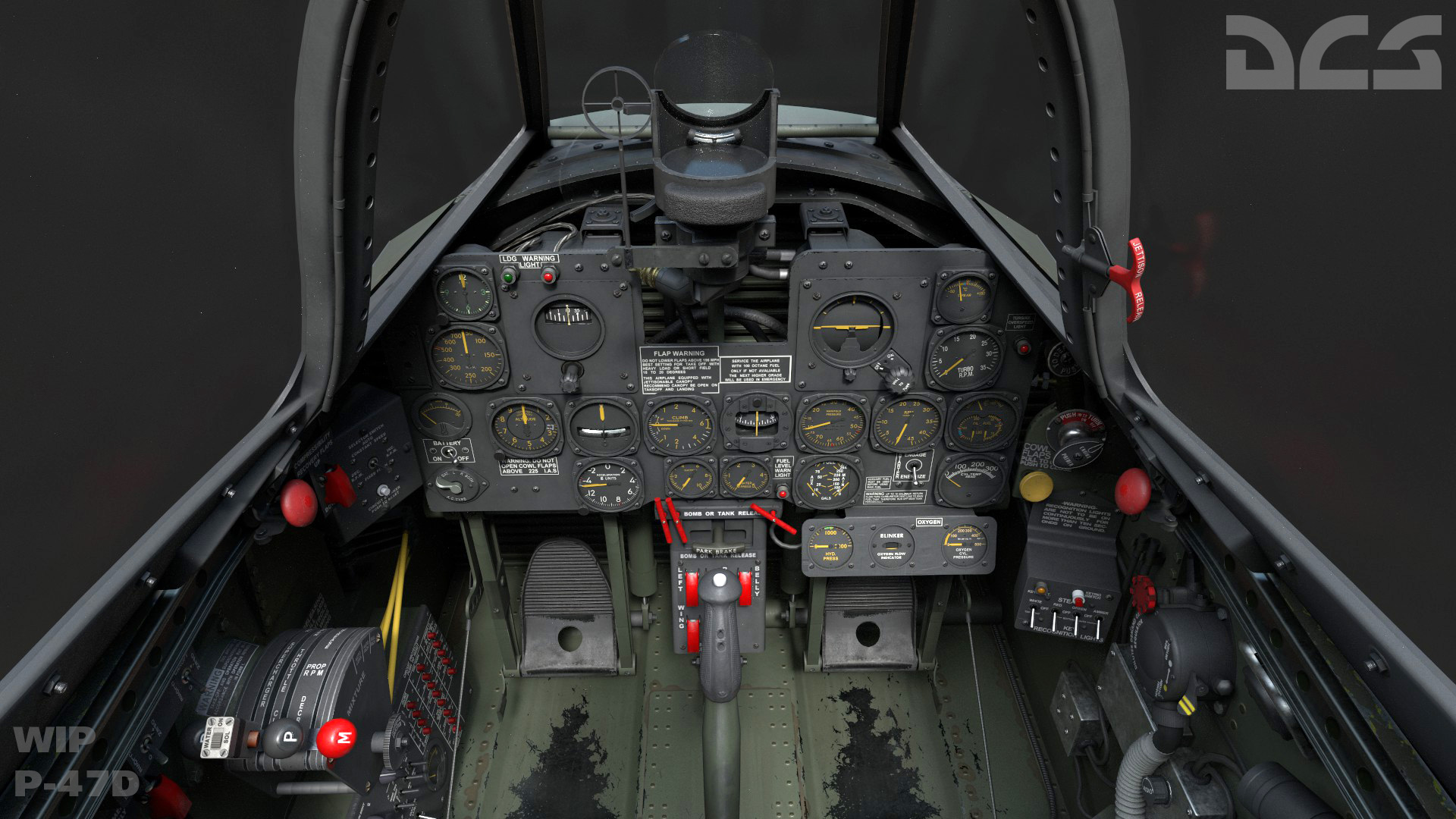 In consideration of what to work on after the Thunderbolt and Me-262, we asked people to express what they would like to see next, thanks for all the votes, we have submitted the results to the team and will look at what can be done in the future! You can view the results here.

World War II Assets Pack
Many new aircraft and ground units are in development for the DCS World War II Assets Pack and we’ve included images of a few of them in this week’s newsletter. We plan to release the first big update to the pack in June 2018. At that time, the cost of the pack will increase by $5 given the additional content. 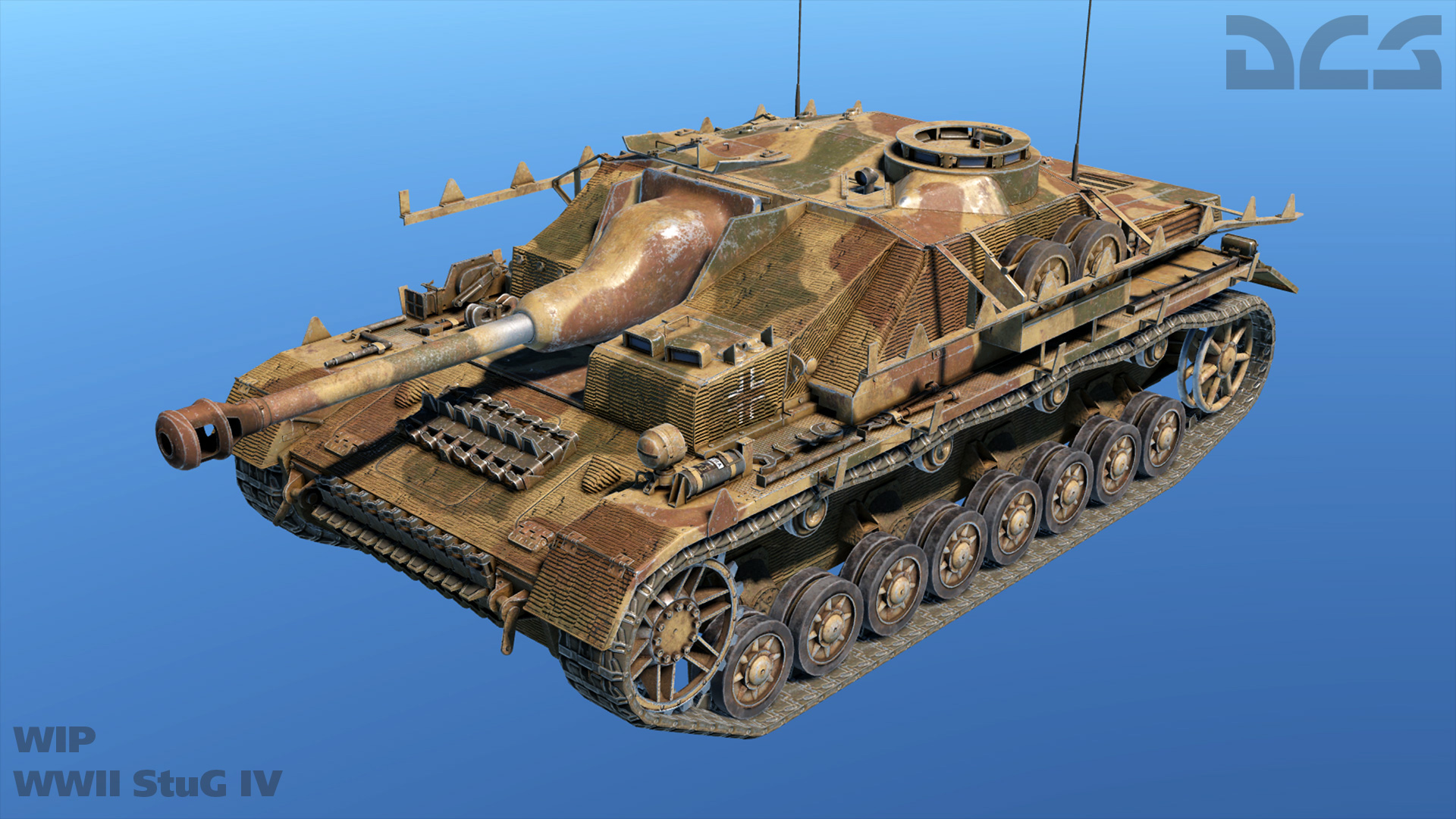